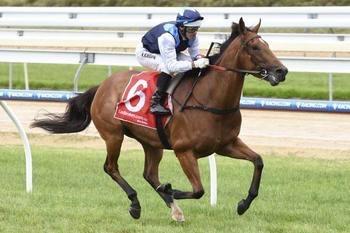 Adelaide city winner, Certain Ellie, resumed over 1000m at Moonee Valley running third behind the highly promising Heatherly and followed up with an unlucky fourth at Cranbourne. However, she showed her real class with a dominant 3.8 length win at Mornington today.

Facing a heavy track for the first time but with little natural pace in the race, jockey Noel Callow took Ellie straight to the front. From there she controlled the race and never looked in danger, quickly putting a space on the field early in the stright and being eased down late. A trip back to town beckons for Ellie.

Certain Ellie was one of three winners for trainer, Paul Rocke, in January. Exclusive Heights, the sister of former stable star, Arousing Suspicion, notched her second career win with an all the way victory at Mornington on New Year’s day.

Stable stalwart, Nisos, broke a two-year drought with an emphatic 6 length victory at Pakenham last Thursday night. It was his third career victory and took his career earnings above $160k.