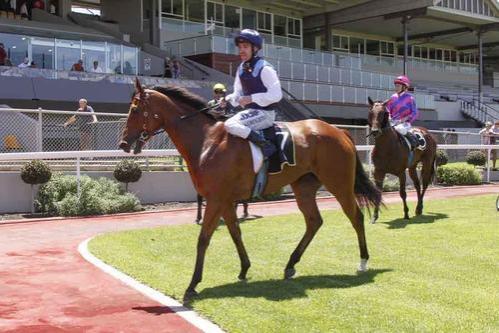 Practice made perfect for Certain Ellie as the filly posted her first win in gutsy fashion on the Morphettville Parks track.

Certain Ellie turned in a respectable effort on debut when sixth behind Ragazzo Del Corsa down the Flemington straight but trainer Paul Rocke was keen to get the two-year-old back around a turn for her next outing.

The James Boag’s Premium Plate (1000m) was the perfect target for Certain Ellie and the filly did a terrific job to get home narrowly.

Alan Creighton took over aboard Certain Ellie and seized the initiative to take the daughter of Not A Single Doubt to the front when nobody else wanted to lead the $40,000 contest.

Creighton was able to slow the speed to suit his mount before asking Certain Ellie to quicken as the field of youngsters entered the straight.

Certain Ellie did plenty wrong in the straight as her inexperience showed when she had led for so long. The filly changed legs a couple of times in the straight but showed she enjoyed the contest.

Certain Ellie held off a wall of challengers to post a momentous win as the victory was the first for syndicators Newminster Thoroughbreds.

Newminster Thoroughbreds managed to secure Certain Ellie after she was passed in at $45,000 as a yearling but the promising galloper earned a $25,000 winner’s cheque for her owners.

Congratulations to Certain Ellie’s owner, the team at Newminster Thoroughbreds and all involved with her terrific win.